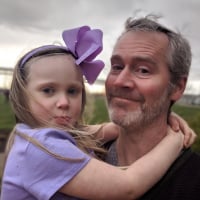 I know you don’t want to hear this from me.  And I guarantee I don’t want to say it.  But we are facing an unprecedented attack on the foundations of democracy itself.  If you are a US citizen, anything less than a vote for Biden is a vote against democracy.

That’s right, I’m saying a vote for Trump, a vote for a third-party candidate, or simply not voting at all -- they’re all the same, and they all mean:

If the polls are accurate, there’s a roughly 50% chance that you agree Trump needs to go.  You know what to do: show up on November 3rd and vote for Biden.  Or even better, don’t wait until then: vote today.  Go to Vote.org if you need help figuring out how.

The rest of this email is intended to address the concerns of those who disagree, and I’ll try to take the most likely questions in turn:

Q: Why do you care so much about democracy?

Democracy is core to our business success, in a variety of ways.  Internally, we are a famously “flat” organization -- nobody reports to anyone else, and advancement is the result of meeting well defined criteria as judged by the vote of those who have already advanced.  How we compensate each other is left up to a team vote as well.  Even our external business model depends on individual employees “electing” to adopt Expensify as individuals, and then “campaigning” internally to get it adopted companywide.  At every layer, democracy is our core  competitive advantage -- both as a company, and as a nation.  But that advantage is only as strong as the clarity of our rules and the fairness of their application.  Any attempt to disrupt the rules or apply them unfairly is a direct threat to the strength of our company, and the strength of our nation.

Q: What gives you the right to tell me what to do?

The first amendment.  To be clear, you don’t need to listen.  But the first amendment exists to encourage people like you and me to find some way to talk about the issues that matter, set aside our differences, and find a common ground on which to collectively govern 331 million citizens.  Yes democratic self-rule can be inconvenient.  But a burden of democracy is that this is literally our job, so I’m asking all of us to take it seriously.

Q: But you’re a company, shouldn’t you remain neutral?

Expensify depends on a functioning society and economy; not many expense reports get filed during a civil war.  As CEO of this business, it’s my job to plot a course through any storm -- and all evidence suggests that another 4 (or as Trump has hinted -- 8, or more?) years of Trump leadership will damage our democracy to such an extent, I’m obligated on behalf of shareholders to take any action I can to avoid it.  I am confident our democracy (and Expensify) can survive a Biden presidency.  I can’t say the same about Trump.  It’s truly as simple as that.

I truly wish I was.  I wouldn’t be sending this email if this election were just about “normal issues” -- taxes, legislative priorities, healthcare, etc.  But it isn’t.  This election is a referendum on what limits, if any, we place on our elected leaders to govern us in a fair and representative way.  This election will decide if widespread voter suppression is an acceptable governing tactic.

Not like Trump.  This is the most heavily litigated election in history, with over 300 lawsuits rushing through the courts before election day.  And in every case, Biden is pushing to enable voters while Trump is pushing to suppress them.  The trend couldn’t be more clear: Biden wants democracy, Trump does not.  A vote for Trump is to endorse voter suppression, it really is very basic.  This isn’t about party politics: if Biden were advocating for half of the voter suppression that Trump is actively doing, then I'd be fighting against Biden, too.  This is bigger than politics as usual: this is about the very foundation of our nation.

Voter fraud is virtually nonexistent, as overwhelmingly shown by data showcased by the White House itself.  That data comes from the Heritage Foundation, a conservative think tank counting every single known case of voter fraud since 1948, which adds up to only 1,290 distinct votes over 78 years.  In 2016 alone there were 138 million votes.  There is just no credible argument that voter fraud is significant, even based on Trump’s own data.

Absolutely.  This is the heart of the issue.  Biden believes that enabling more people to vote will help him win.  Biden wins by promoting democracy; Trump wins by suppressing it.  A vote for Biden is a vote for democracy.

Q: So what if Trump gets elected by voter suppression, all’s fair right?

Well that’s what we’re going to decide, on November 3rd.  Do you want your elected official to win based on the merits of their ideas?  Or based on the ruthlessness of their voter suppression?  And if you’re ok with “just a little suppression” -- where do you draw the line?

Q: Why send me this when the polls say Biden is going to win?

The polls said Trump was going to lose last time, and he didn’t.  But even if the polls can be trusted, that might still not be enough.  Trump has stated repeatedly he will only honor an election that he personally feels is fair.  So much depending on his personal judgement is worrying, because he has rejected the overwhelming expert consensus that voter fraud has been negligible historically, and has also said he believes it would be impossible to lose a fair election.  Accordingly, the only way to ensure a peaceful transition of power is to ensure this election is an overwhelming, undeniable landslide in favor of Biden.  Any excuse to question the election is an opportunity for Trump to refuse to leave the White House, plunging this country into a Constitutional crisis bordering on civil war.  No matter how slight that risk might be, the consequences of it happening would be so catastrophic to society and the economy, we need to do all we can to prevent it.

So one final plea.  As a fellow citizen, I fully support and respect your Constitutional right to disagree -- and as an avid supporter of democracy, I value that disagreement.  Constructive, well-informed debate (hopefully using the most accurate, least biased news source available) is what makes this nation so exceptional.

But the Constitution is only as strong as the respect we give it.  I’m asking you to cherish it close to your heart, and demand that those you elect do the same.

PS: Agree or disagree?  Reply to this email to share your thoughts with Concierge, or hit me up on Twitter @dbarrett to discuss!

PPS: Want to do even more?  Support the National Popular Vote to make every vote count equally toward the presidential election, even if you aren’t in one of the 12 states deciding this election.

PPPS: Are you annoyed that you received this as a non-US citizen?  If you're lucky enough to live in a democracy, then I'd encourage you to protect it and be willing to do uncomfortable things -- like emailing millions of customers -- to defend it.

Flag -44 · Accept Answer 47Off Topic Insightful 1Vote Up 2Awesome
This discussion has been closed.